However, leave isn’t just a static evaluation: it is also dependent on how well those tiles play on the board.  The number of points you should sacrifice depends on not just the quality of each leave, but how well that leave works on a particular board, as well as other factors (such as entropy, game score, leave implication, etc.) 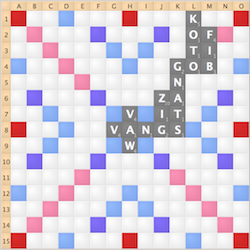 In Diagram 3, QUiCK is a substantially preferable play since the S is almost worth as much as blank.  Often after SUQ, the blank will end up being used as an S on this board: thus, the S increases in value while the blank decreases in value, making QUiCK a far superior play. 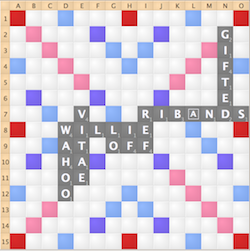 In Diagram 4, you need to exchange.  While the Q is normally the worst tile in the game, it is actually a good tile in this position, especially with the possibility of QU scoring plays, QI, and QAT.