While words are important, they are instruments used to help you win: they are simply letter sequences used to maximize your score or minimize your opponent’s score.  When it comes to the strategy of Scrabble, we’re primarily not thinking about words, but about spatial understanding. Scrabble is a board game, like chess, checkers, etc. where the primary themes are not about words, but about possibilities and space.

To understand Scrabble, you must understand space. Understanding possibilities and space is especially important in its relationship with bonuses.  Bonuses are (usually) seven or eight letter words that use all of one’s tiles, thereby gaining an additional 50 points, and often swinging the game into that player’s favor.

Because of this massive increase in score, players make a substantial effort to play more bonuses than their opponent: by keeping tiles likely to result in a bonus, opening the board when they have good bonus tiles, and blocking the board if they feel their opponent is likely to have a bonus.  Playing more bonuses than your opponent is undoubtedly one of the keys to victory in Scrabble.

Of course, good letters are important. Letters like the R, E, and S are better to play a bonus than the U, V, and Y.  Likewise, having letters in good positions as floaters (existing letters which can be used for an 8 letter bonus) is important as well: the E is not a good bonus line if it has to start words, while the C or M isn’t a particularly good bonus floater if forced to end words.

To truly understand bonuses, we need to first understand the geometry of the Scrabble board.  The Scrabble board is 15×15.  This means that dimensionally, there are 9 spots per row, or 270 places to play a seven letter word (9 places per row or column) and 240 places to play an eight letter word (8 places per row or column).  In this sense, you can think of the board as having 510 potential “bonus lines”.

While it is the case that bonuses on the outside of the board score more points, it follows from the board dimensions that squares closer to the middle of the board are better floaters for bonuses due to their flexibility. (For example, any letter played on the opening turn is immediately available to be used for an eight letter word with that open letter being played in any position: it’s located in the center of its respective bonus line.)  This flexibility is important: the usefulness of a floating tile depends on the amount of space linearly surrounding that open letter. 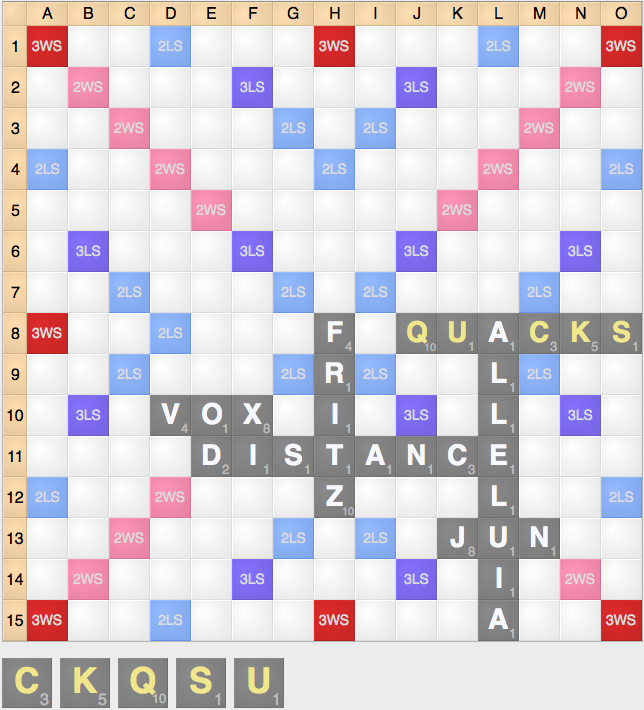 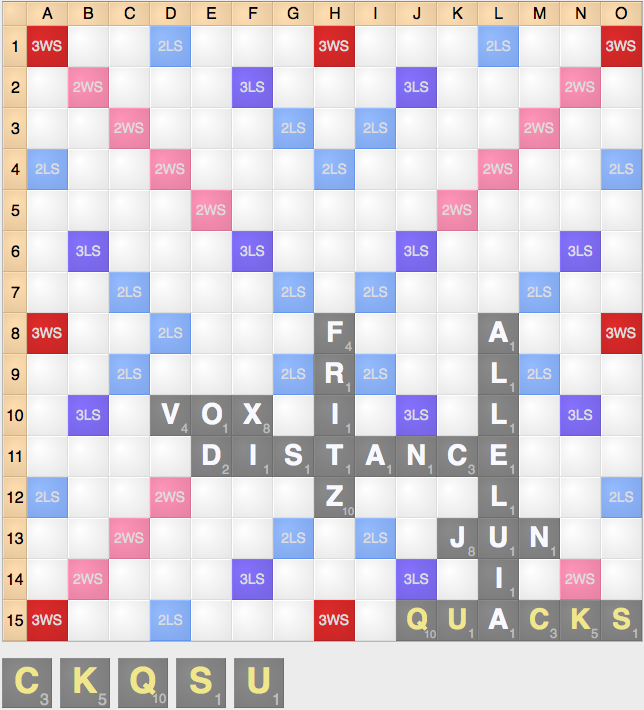 Although the S is most common in the last position, flexibility is still important. For this reason, the S in the right position is much less dangerous than the S in the left position, resulting in a much fewer number of bonuses.

At the beginning of the game, while 510 lines are unblocked, only 14 bonus lines available on turn 1, meaning there are 496 potential bonus lines that are inaccessible for now.  Quickly, more lines start to become available, but in the meantime, over the course of the game the number of potential bonus lines start to dwindle, as 7 and 8 letter options become quickly untenable. As the game progresses, more and more bonus lines are available, but many of them are blocked: they either have multiple tiles existing in the line itself or in adjacent lines that make bonses unplayable. 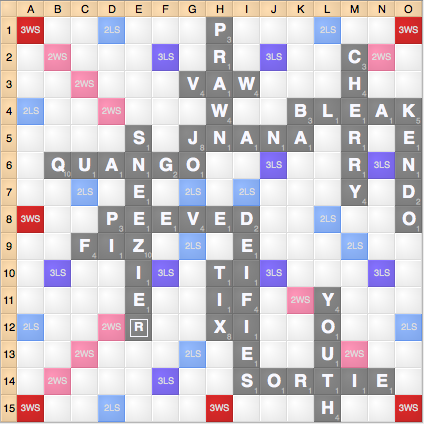 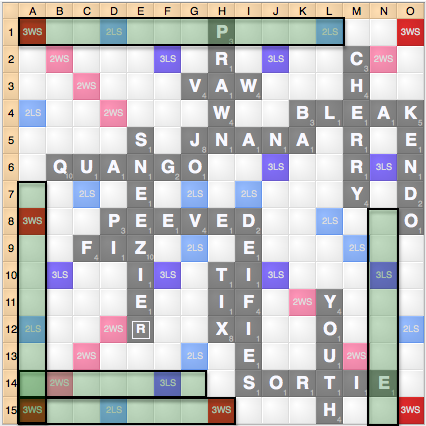 This is an example of an exhausted board, as there’s very few bonus lines available even though there are plenty of tiles left: there’s only two (weak) bonus floaters currently available and only a handful of potential bonus lines in the bottom left corner of the board. If you’re going to bonus, you better do so quickly, as soon all the bonus lines will be exhausted. 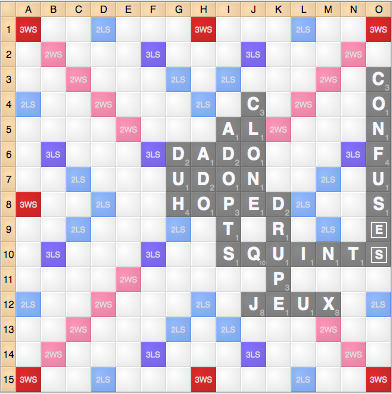 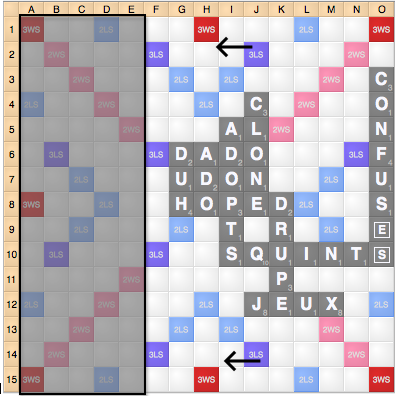 This is an example of a restricted board. In this case, columns a through e and all those corresponding bonus lines are totally restricted due to the shape of the other words on the board, and it’s going to be tough to access that side of the board using the top or bottom of the board, especially with an opponent who is unwilling to cooperate. Although there are hundreds of bonus lines remaining, it’s unlikely you’ll ever be able to assess the vast majority of these lines.

Of course, it’s easily within a player’s control as to which potential bonus lines are restricted and exhausted, even in the early positions of the game. 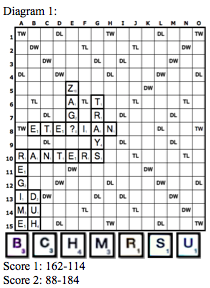 In this position, you have the option of trying to restrict the bottom right of the board and start to exhaust the top right (by playing CRUMBS i3) or opening the bottom of the board (by playing THUMB d10). When ahead you should definitely look to be playing CRUMBS (even though it sacrifices your S), while when behind you should look to play THUMB.