One of the great myths that exists in Scrabble is that everyone who wins tournaments plays perfectly all the time.  This is not the case: all players make mistakes, yet top players just make fewer mistakes.  However, just because you make mistakes doesn’t mean that you can’t win.  Enter the current case study: The 2017 WESPA Championship.  For most players, the WESPA Championship is the most prestigious event every year.  Winning this tournament can single handedly validate your Scrabble career.

It was a fearsome finals. Both players showed amazing grit and perseverence to make it this far after four grueling days of competition. It was a grind, and both players made plenty of mistakes, Before this, the last 4 World finals had been clean sweeps. This was a best of 7: and it ran all 7 games. In the end, Akshay prevailed, winning $20,000 USD and the title of WESPA champion.

For me, the takeaway from this tournament was simple. People believe that to be a world champion, you have to never make a mistake: that you’ve gotta play perfectly at every turn, but that’s simply not true. You don’t need to play flawlessly.  You don’t have to memorize every word in the dictionary.  You just have to put in the effort, and try to get better, day by day, and if you play your best and get a little bit of luck, you can find yourself in the finals of the most prestigious tournament in the world.

When we analyze the finals of this championship, we’ll find that there are plenty of errors: significantly more than top players like Nigel, Wellington, Eldar, Brett, etc. made in their championship runs.  And that’s okay!  I like to think of it as an inspirational story of two players who maybe don’t have the innate talent and sometimes make mistakes, but have the heart, the grit, and the desire to defy all odds and achieve their dreams: dreams of becoming WESPA champion.

With that said, let’s get to the analysis.  I decided to color code each game each play based on whether or not it was optimal according to my analysis, aided by the help of looking through plays by using the computer program Quackle.  The color coding works according to the following key:

Red = Severe Blunder (phoneys, missed bingos, and other large errors).  These are unquestionable errors that both players would play differently if they had the opportunity.

Pink = These are smaller errors but errors that I still think are clear and obvious to the vast majority of top players.  I feel fairly confident most players would agree that these plays are errors.

White = These are the plays I feel are either optimal, or somewhat ambiguous.  (Note: I don’t agree with all white plays, i.e. Akshay’s x6 in his 4th rack of game 1) 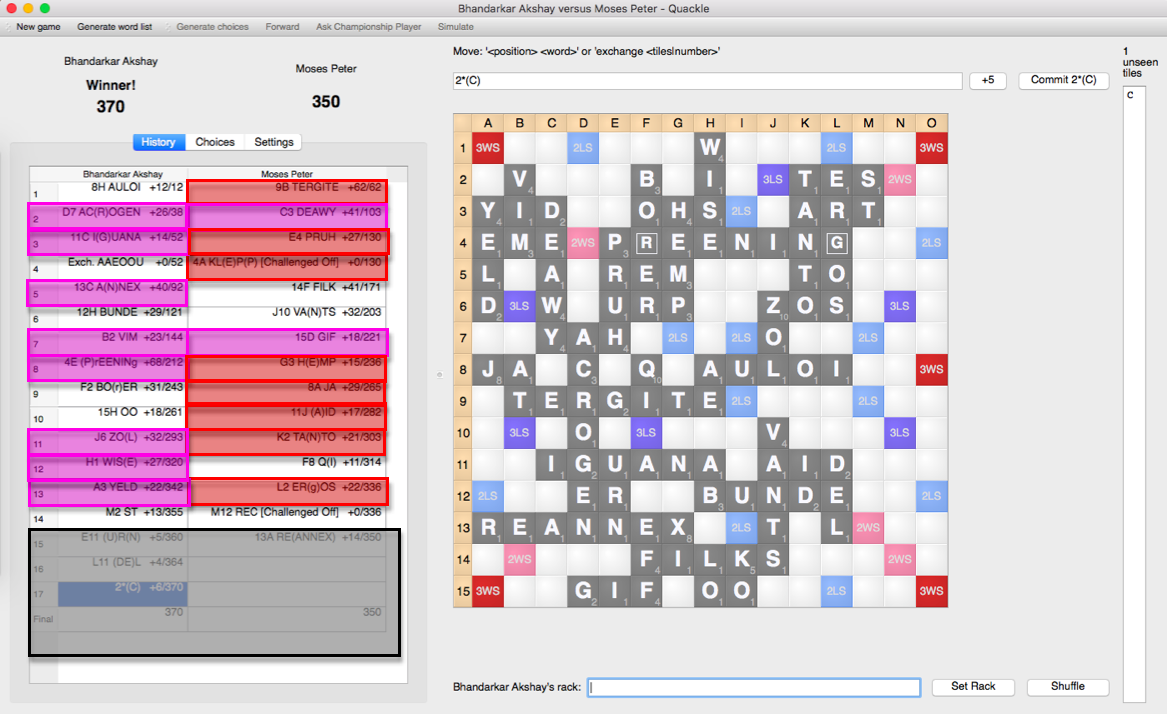 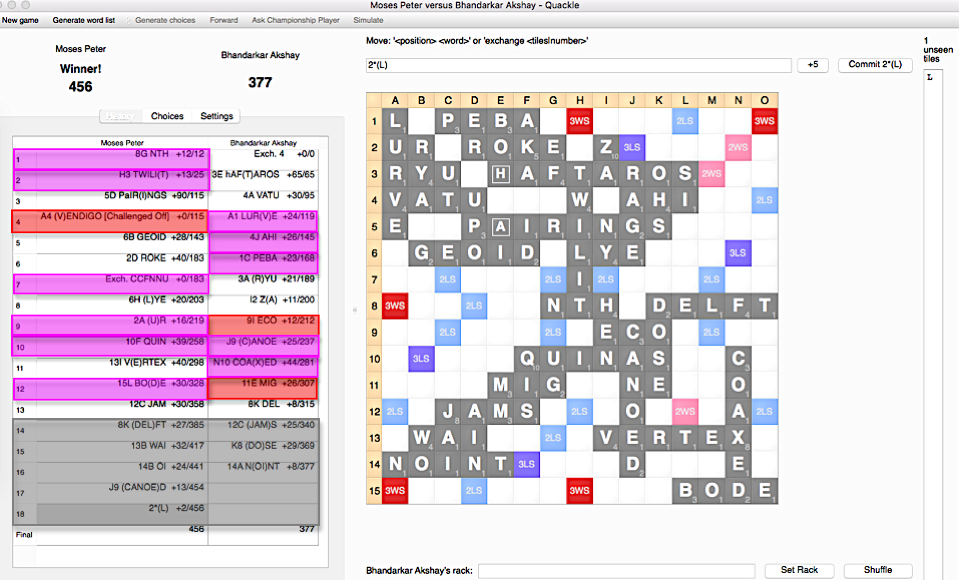 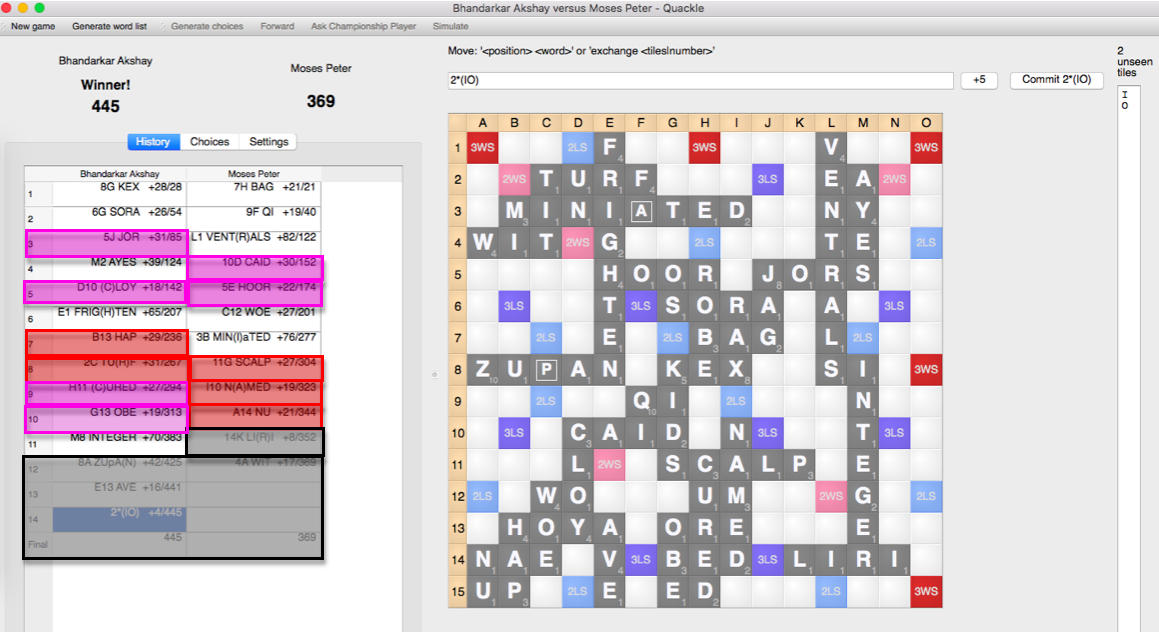 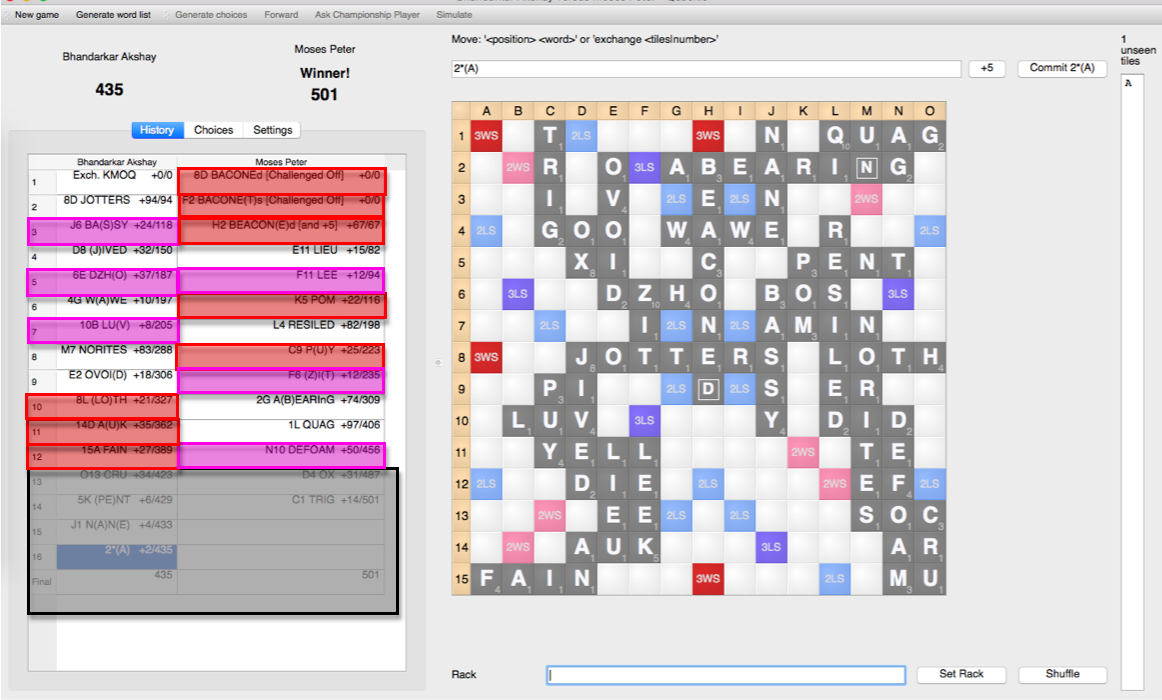 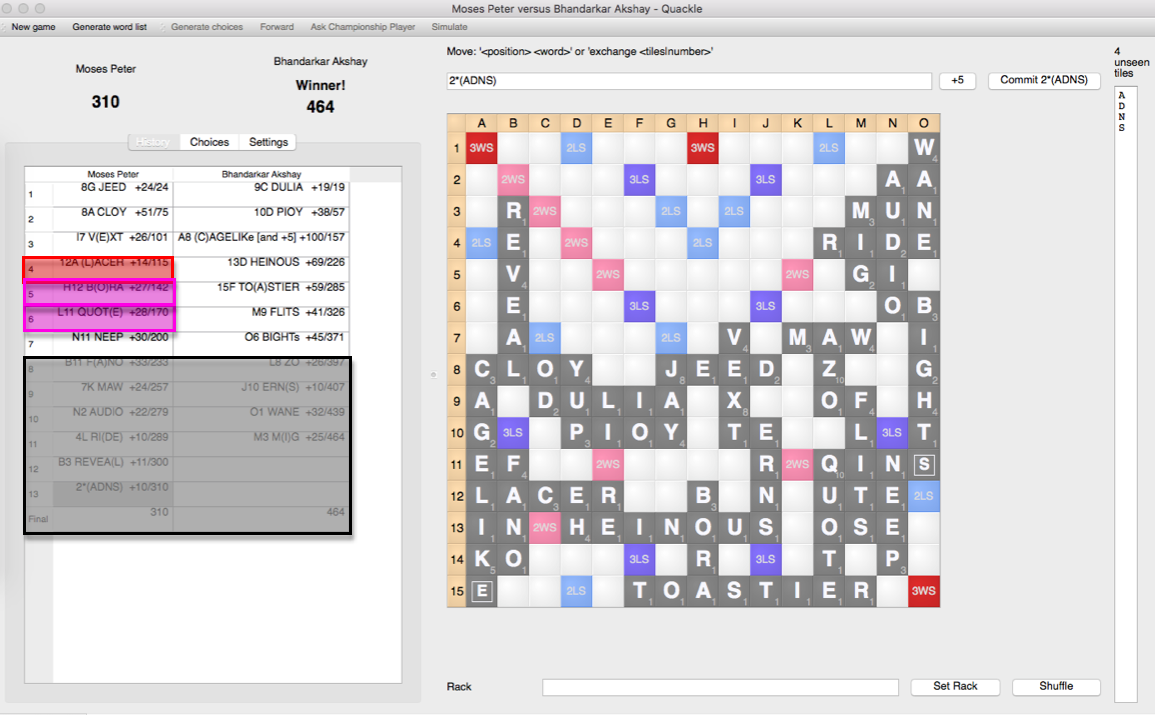 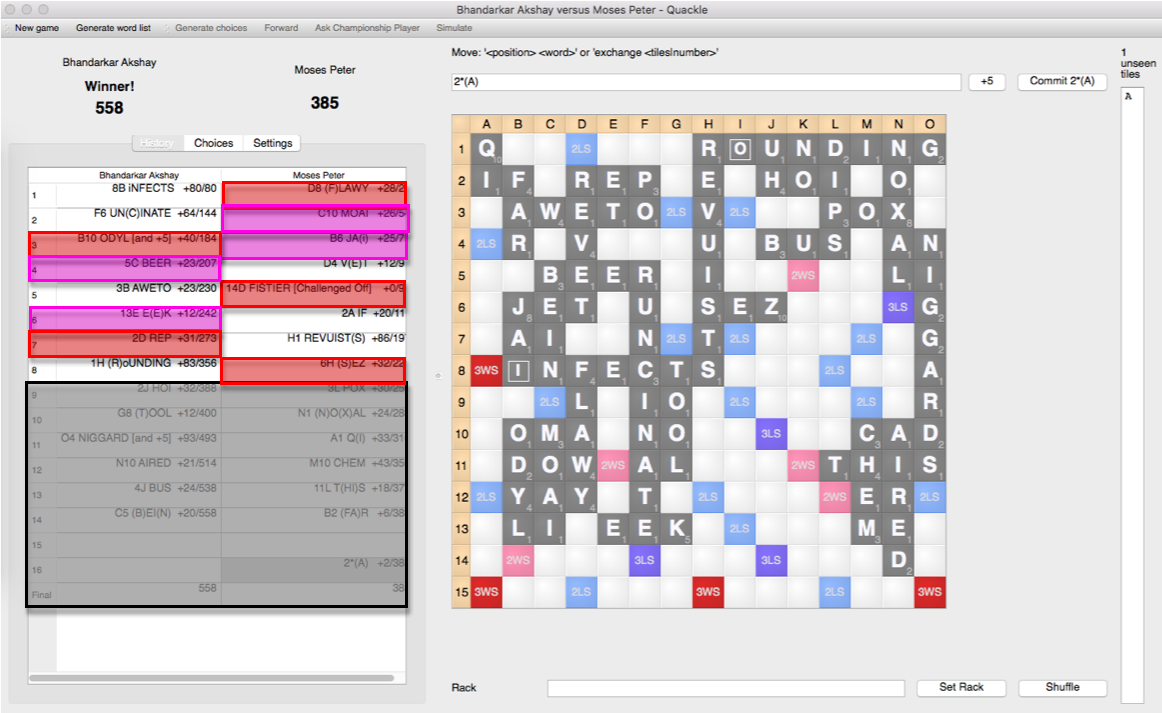 I thought Akshay’s play mirrored his play in earlier games, which shows amazing composure, and as a result he largely avoided huge blunders.  I also liked many things that Akshay did, especially when it came to leave adjustment and vowel-consonant ratio: there were several spots where the pool was unbalanced between vowels and consonants and I think Akshay reacted accordingly very well.

If I were to give Akshay advice, it would be in three areas:

1. Generate more plays. Many of Akshay’s errors were not strategic choices, but merely overlooked plays, especially parallel and short plays in confined spaces, and especially awkwardly constructed words 3 and 4 letter plays. This is largely fixed just by practice, especially on more constricted boards where these plays are often best.

2. Get away from being so leave focused, especially on closed boards.  It felt like Akshay focused on his leave too often and that might have let to many of his errors, particularly where there was a good 30 point play with a good leave, but there also existed some better play.

3. Acquire some strategic depth.  It seemed that Akshay was trying to keep it simple, and ignored many of the more nuanced positional components throughout the finals.  While this is a great way to play, it runs into trouble when you start playing some of the best players in the world, as they’ll put you in extremely complex situations that you’ll need to be capable of navigating if you want to win tournaments like this consistently.

Losing a best of 7 final by a score of 4-3 is mentally tough for any player, especially when you know that you made some key mistakes.  It’s obvious that most of Peter’s mistakes are uncharacteristic of his playing ability.  I did see glimpses of Peter’s toolbox throughout the tournament and it actually formidable when everything’s working: unfortunately, it wasn’t working this finals, likely due to the stress that comes from having the opportunity to win the WESPA championship in Africa and the accolades that would accompany that signature achievement.

Many of the errors Peter made are not emblematic of his game, and because of that, I’m going to skip over some of them: I know Peter can find bingos and has pretty good word knowledge.  That being said, here are three things I think Peter can improve on with regard to this finals:

1. Stay calm.  Treat this as a valuable learning experience to learn about how to adjust mentally to high-pressure situations.  Whether it’s meditation, finding someone to talk to between games, changing your diet, or developing a routine, it’s important to find some way to execute even when under extreme stress.

2. Word knowledge is not word security.  Although I don’t believe that this performance was reflective of Peter’s normal game, I do believe that there probably are some word security issues in play.  If we took Peter’s ten most substantial errors (all of which were word knowledge) while I don’t believe in a normal situation he’d make all ten errors, I kinda have to believe he’d still make two or three, and that could be improved upon, particularly in feeling confident which words take which hooks.  Pressure usually exacerbates holes that already exist in your game, but it usually doesn’t create holes that never existed in the first place.

3. Cool it with the defense.  There were times when Peter played defense in situations where he just wasn’t in an advantageous enough position to do so, and was so focused on his opponent’s bingo opportunities that it seemed  he overlooked ways that Akshay could potentially win by simply outscoring him.  I know that Peter has solid defensive fundamentals, but he could use some work in knowing when to employ them and hold off in situations where defense might not be the best idea.  He just plays defense too much.