This is the fourth installment of the series Star Plays.  For other posts in this series, please click here.

When people look at Scrabble in the 1990s and 2000s, they think of Brian Cappelletto, Robert Felt, Jim Kramer, Joe Edley, and Joel Sherman. But one name that many people seem to forget is Trey Wright. Trey was known for his word knowledge, but he also had the ability to be strategically creative, occasionally making great plays that few others (especially at the time) would ever dream of.

When Trey entered the finals of the 2004 National Championship, most people considered him an underdog. His opponent was more well established, and had already won a Nationals before. 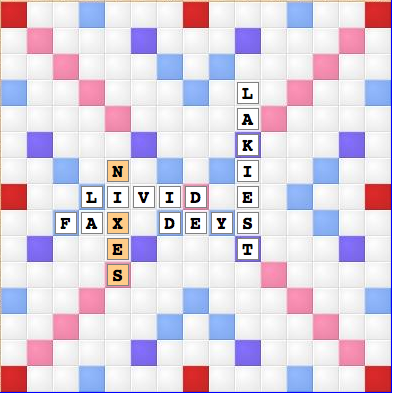 Nearly every player believed the play was obvious: Either play AeRONAUT or ARgONAUT at 5e for 78 points. And Trey knows the word and found the word almost immediately. He even lined up the tiles to play the word.

And then he played cALUTRON for 66.

Now, in modern times this would actually still be a pretty cool play, but 10 years ago when Trey made this play, it was basically unheard of. The reason is very simple: quadrant analysis. cALUTRON destroys the top left quadrant and puts him up by more than a bingo. The extra 12 points is not worth nearly as much as blocking that top left quadrant. In addition, cALUTRON doesn’t leave an S hook. It just makes it so much easier to block the board in the long term. Reducing long term entropy is just too important.