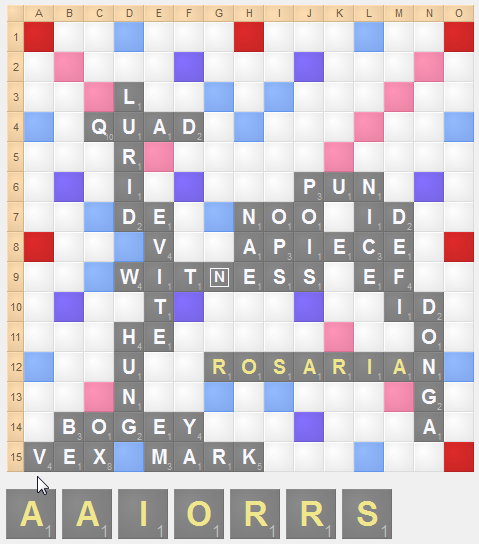 This is the third installment of the series Star Plays.  For other posts in this series, please click here.

Range finding is a frequent concept, but how often does it really show up?  Well, let me present to you a game I made during the National Scrabble championship.  My opponent was a well-respected player, widely considered to be in the top 10 in the world. In this case, I played the seemingly bizarre looking ROSARIAN when I could have played ROSARIA for 15 more points. While ROSARIA does open a triple alley, it certainly doesn’t appear that avoiding the alley is worth 15 points. So what is going on?

The strength of ROSARIAN over ROSARIA is pretty obvious: it doesn’t open the triple alley for high scoring or bingo options, and it closes off the N and G to potential bingos. There really doesn’t look to be anything else going on.

However, the key component of this play is the opponent’s previous range: Exchanging 4. Now, Komol is a very good player, and he thought for about 30 seconds before making this play. There is little chance that this move was not thought out, and I can use that to my advantage here. Komol’s range may seem very wide at first, but it’s not: it’s fairly narrow. So let’s go through a normal x4 range and figure out what is possible for Komol to have:

Strong non-S bingo leaves: Almost definitely not. Komol would definitely have a vowel in these, such as RET or NET, but Komol is a strong enough player to realize on this board there’s no point. There is a small chance Komol would keep ER, but he’s not keeping an N or T on top here with the consonant-heavy pool and bingo line shortage. I dismissed this entirely.

Scoring leaves: This is definitely possible. I see no reason why Komol can’t have ENZ, ERZ, or especially ETZ here. The extra low-point consonant makes his rack much more flexible and gives him options in case the consonants get ugly, especially if he had a rack like ELLLNTZ. He *might* trade the N, probably not the R, and definitely not the T. He can also easily have scoring leaves with the S, (but not without: he’d be trading the T with ETH, for example) but most of these involve the Z, with a few involving the H. The H is less likely because Komol would cash most _ (vowel) SH combos immediately. (ZES, ZAS, ESH, ISH, etc.) He would also keep any very lucrative S setup (ZES or ZST, and *maybe* JST and EJS, though maybe not as the J is not a good tile, and it doesn’t hit anything else other than the T. I don’t know what he’d do: my guess is he’d trash the J but I’m not certain)

Strong S-bingo leaves. Much less likely than you’d think. RST and NST are not happening: this board isn’t conducive to that because of the vowel heaviness: he’d junk one of the consonants, as he should. Maybe he’d keep NST, but keeping the R with 3 more out on this board is unlikely from his POV. EST is unlikely because he would probably have another ugly letter he is trading that can score decently well, or has two letters he can use to score 25-30 and keep a reasonable leave on column o. I guess ELLLSTT is possible, but that’s a very small part of his range. I don’t think Komol is trading with ELLSTTW, or with even the B.

Blank leaves: This is a very large part of Komol’s range. Double consonants come back into play, and keeping ?ER etc. also very, very likely. Also, ?Z and ?S racks are all very, very possible, and his range with the blank is much wider than with the S. I’d guess that he has the blank with around 2/3 of his range, the S about 1/3 of the time, the Z about 1/3 of the time, and the H about 1/6 of the time in their leave, + however Komol draws each tile from the 4 tile draw. (obviously there is significant overlap).

It’s worth noting some previous knowledge that heavily influenced this play: Pakorn Nemitrmansuk and the current Thai Scrabble scene. Pakorn is considered by most players to be one of the best 3 players in the world, along with Adam Logan and, of course, Nigel Richards. Pakorn is considered the main guy in terms of Thai strategy: several times, Pakorn has housed various players and they would come over and Pakorn would teach them strategy, including Komol. As a result, Thai strategy is very similar among all Thais, and is different in several ways, but the salient way that it is different in this position is in leave values. In Thailand, the values are largely polarized from us: the S is worth nearly 12-14 points instead of 8, the Z is worth around 5, etc. This makes it more likely they are keeping the Z in an exchange. If they are going to err, it’s by keeping too many Zs. (In Collins, it is too. FWIW I do believe the S is highly undervalued in TWL, although not the Z. For more information, see the leaves page.

Against this range, suddenly ROSARIAN makes a lot of sense. ROSARIAN reduces the value of the H and Z significantly and reduces the amount of blank bingos significantly (parallel bingos down column A or rows 12 and 13 are now history: the blank is basically reduced to an S for the most part, unless Komol has both a blank and an S in which case I am in horrible shape regardless). It does leave the score closer, and with an S he can tie the score up at 15l, but thats more than okay since the S had tremendous value on this board anyway, since the S hooks are extremely potent and difficult to block.