This is the second installment of the series Star Plays.  For other posts in this series, please click here.

Here is a position between Nigel Richards (the best player in the world) and Ben Schonbrun, a mid 1800s player from New York: 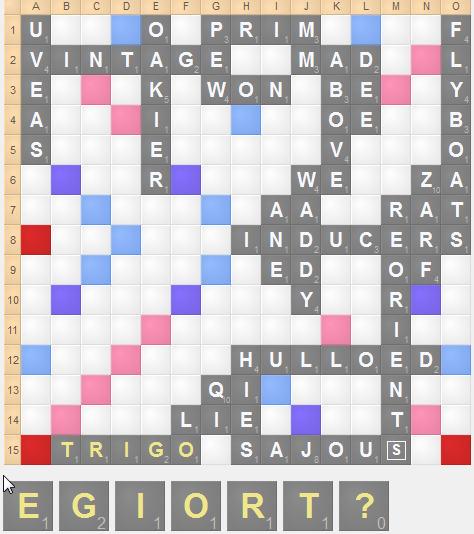 Take a minute to figure out what you would play and why.

Most players here would play either BEIGY or GOITERs/GOITREs. Instead, Nigel decides to score 9 points and keep E? on his leave. What is going on?

First, let’s take a look at the strengths of TRIGO. There are two general positives with this play. The first one is that it leaves one tile in the bag. Leaving one in the bag in this scenario is advantageous for a few reasons. The first is that it doesn’t allow your opponent to leave one in the bag. Letting your opponent leave one tile in the bag is undesirable since it allows your opponent to limit your scoring on the last play: on almost all boards, you will be unable to score well with that last remaining tile, while your opponent gets to offload all of the points and strong tiles on their rack. The second is that it opens up new bingo lanes through the T and R of TRIGO. This means that there will always be a bingo line open. If we look at the board after TRIGO, there is no way to block all of the bingo lanes: any play that blocks the top-left of the board will now leave open the T and R in TRIGO as well as the s/HIES hook for Nigel. And at this score, any bingo will score enough points to allow Nigel to eke out a win against almost any non-bingo scenario.

We also cannot forget to look at the potential downsides of the “conventional” options. Any bingo is going to lose to a majority of out-in-twos, especially given Ben’s likely S (more on that later), a sub-15 point lead, and 7 tiles on Ben’s rack as opposed to 6. As we’ve already covered, BEIGY will allow Ben to either score well (with a play like NIX b4 (30), leaving one in the bag and leaving Nigel with little shot) or block the top of the board fairly well, greatly reducing Nigel’s bingo options.

When phrased like this, Nigel’s play should at least look a lot more reasonable. Of course, there are still downsides of TRIGO: the play fares extremely poorly with an X draw, and any draw that does not bingo (Nigel needs a balanced draw).

At this point, we need to quantify these possibilities, and that requires understanding Ben’s range from Nigel’s perspective. Ben’s previous play was WON 3g (23), and his prior play was UVEAS a1 (27). UVEAS strongly infers the S, and WON infers no H (SHOWN), likely duplicate N or strong bingo tiles (COW, WOG, WOP), and at least one more vowel (otherwise playing through the I). This means Ben’s range largely consists of strong bingo leaves (INST, EGNS, CENS etc.) or strong balanced SX-vowel leaves (ESTX, etc.)

Against this range, TRIGO does quite well. With a strong bingo range, Nigel needs Ben to miss, regardless of what he does. He needs Ben to draw the X, 3 consonants, or at least two ugly consonants and leave the X in the bag. Against this range of racks, TRIGO does well, as he can bingo fairly often and does not need to worry about out in twos that will inevitably ruin Nigel post-bingo. Against an X, Nigel’s play is even stronger: the X can easily damage him both in the endgame and in the preendgame, but against TRIGO the X is almost completely neutralized. Given these circumstances, it is very clear that TRIGO is, in fact, a very reasonable option.