“Don’t worry about what your opponent’s words – just play your game” and the like are tossed around the Scrabble community. We should be doing the opposite. Scrabble is not a solitary game – our opponent’s tiles matter as much as our own. Though one only sees the backs of their opponent’s 7 tiles, specific letters and patterns can often be discerned. This is important because you can adjust the types of moves you make to counteract the powerful tiles your opponent may hold.

During a game, it is wise to take note of your opponent’s “range” – the tiles and combinations they are most likely keeping. Good Scrabble plays follow common patterns, and if we assume your opponent is playing well, their plays give valuable information about the tiles they keep. In general, players try to strengthen their racks from turn to turn, so your opponent’s tiles are often slightly better than average given the pool of unseen tiles.

The most notable and useful example of range-finding is in setups. The most common tiles to be setup are SQZXJ, because hooking an S to a word provides a new bingo or scoring lane, and JQXZ can be bombed for 50+ points on hot-spot squares. JQXZ set-ups can be sniffed out if your opponent makes an odd-looking move or one for few points, putting a vowel next to a premium square. Sometimes set-ups are made for specific words, in which case you can look at the pool to try and find high scoring words your opponent might want to set up. If you are able to infer tiles from a set-up, you get the added bonus of knowing a specific tile of theirs that you can prevent setting up on future turns.

The most common type of inference is looking for “bingo-proneness”. Generally, if your opponent plays 2-3 tiles, especially 2 vowels for few points, they are keeping a great bingo leave. To defend against bingos, you could block lucrative lanes. If your opponent plays 1 tile, very often they are keeping an amazing bingo leave. On a more bingo-friendly board, it may be wise to not even attempt to block at this point – you’ve deduced your opponent’s rack is so strong that they may bingo next turn regardless of your move.

Just today, against a strong player I had a rack of CEIIKRW early in the game. I elected to play W(A)CKIER for 26 keeping an I, passing up WICK(E)R for 30, keeping EI. By looking at the tiles I played, CEIKRW, my opponent could look for other options using those tiles and find WICK(E)R. Since I chose to sacrifice 4 points to play my E, they could infer the last tile I kept is a vowel, because every E + consonant leave will not be 4 points worse than just the consonant leave. By looking at your opponent’s alternative options with the tiles they played, you can infer the types of leaves they kept. As well, you can go through the alphabet and eliminate other possible tiles from their range.

Lastly, range finding has a few general patterns, which match the patterns of good Scrabble play. If one has duplicate tiles, such as a rack of AFINNRR, one wants to un-duplicate their Ns and Rs with a play like FIRN. So when your opponent makes a play like (M)ATT, the tiles A and T are in their range. This doesn’t mean they necessarily kept AT, just that those two tiles are more likely. As well, when one has an imbalance of consonants and vowels, they usually play off the type they have an excess of. When your opponent plays mostly vowels, vowels rise closer to the top of their range, and vice versa for consonants. ETUI often gets played from a rack of EEEIRTU.

During a game, your opponent’s moves are not always so obvious – it may not be clear that they kept a certain tile or tile type at all. At the beginning of each turn, the best players immediately consider their opponent’s range – sometimes they can’t discern anything, but sometimes the information can be extremely valuable. Your opponent’s range is ultimately dynamic – it changes from turn to turn but some parts may stay the same. Considering a range over the course of 4 to 5 turns can clear up confusion that might occur on a single turn.

Tile inference is very nuanced, and the techniques behind it may change from opponent to opponent. In the end, range-finding is important only when one knows what to do with the information – as bad as it is to ignore your opponent’s plays, overcompensating can be more dangerous. 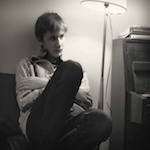 Jackson Smylie is currently the 12th highest rated player in Canada. His Scrabble results can be found here.