One of the most important and yet confusing concepts is synergy. While some synergies can be easily figured out by observation (QU or CH for instance), others may not be as obvious (such as RT or CE).
Formally, the definition of synergy is the following: We can call a leave synergic if V{E(1)} + . . . V{E(k)} < V{E1, . . . Ek} (if the sum of the value of each tile is less than the worth of the leave as a whole)

While many tile combinations possess synergies, most of these synergies are insignificant. Even significant tile synergies do not require you to sacrifice a lot of points. For example, with an opening rack like CCHHLNU, you’re better off playing HUNCH than LUNCH despite the CH synergy. Synergies are usually a minor detail and are less important than vowel-consonant ratio or tile equity.

Nevertheless, it can still be a useful detail, especially when there are two plays that score a similar amount of points. Although small mistakes don’t mean a lot individually, many of these synergy decisions occur all the time: thus, small mistakes can really add up.

Here are some guidelines you can use to figure out which tiles are synergic:

1. Bingo tiles are generally synergic with other bingo tiles. (exceptions include LN, LR, and to a smaller degree RN)

2. Poor tiles that form a word are usually synergic. Letters like STXY (XYST) and GPPUY (GUPPY) are better than their ugly components because you can often get rid of many or all of your tiles next turn. Likewise, prefixes and suffixes have a synergy, depending upon their commonness. Strong synergies include OVER and ABLE, while weak synergies include OUT and SUB.

3. Three and four point tiles that form short words with each other or with XJZ have small synergies, such as JAB, ZAX, FOB, etc. This is true because sometimes there are places on the board to play these words and score well.

On the converse, here are some rules for determining anti-synergic combinations:

1. Clunkers do not get along with each other unless they form short words. (V goes horribly with almost any other junk tile, JC has a significant synergy, GK, etc.) 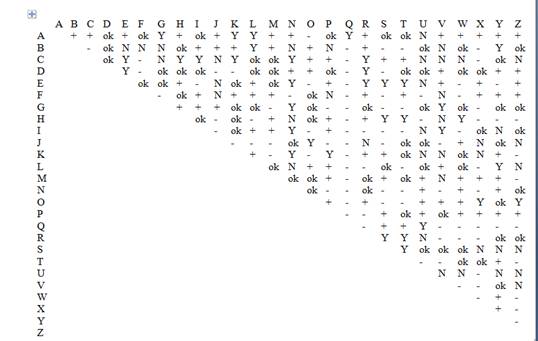