A common assumption that many Scrabble have is the notion that a tile has a set equity value: an exchange rate with points that remains fairly constant.  In reality, the worth of a leave changes over time, depending on the situation and stage of the game.  In these situations, it important to understand how to perform leave adjustment.

While we talked in a previous article about how to adjust the value of leaves, there are actually some scenarios where the significance of the concept of leaves changes wholesale. In certain positions leave matters as much or more as points, while in other positions, leaves are far less important than points.

The first situation we should observe is a very defensive board.

In this position, the leave values regress to zero.  There just a lot of scoring or bingo options, and this fact will only get worse on future turns.  Because of this, QANAT is actually a worse play than QiBLA, despite having a higher valuation, since the importance of leaves is diminished.  In this case, the recurring benefit of S? shrinks dramatically.

The second situation we should look at is a very high-entropy board. 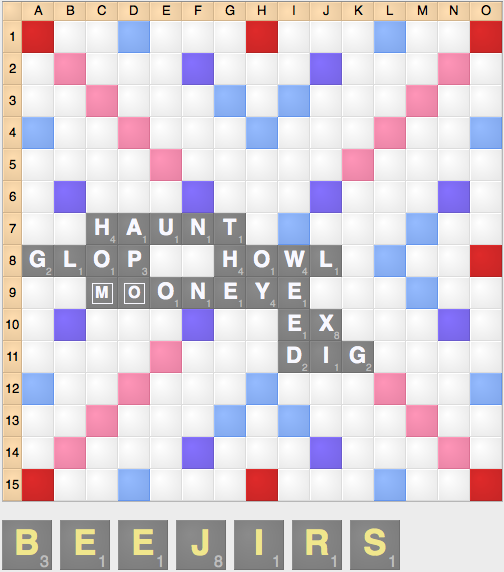 In this position, JIBES and JIBERS has a higher valuation than JEU, but the BEIRS gains value because of the high entropy.  Here, points means far less and leave gains significant value since scoring tiles do so poorly on this board.  Even if you fail to draw a bingo next turn, you can fish again with little risk as your opponent will likely be unable to score well.

In the 1980s, turnover was considered a huge part of Scrabble strategy: the idea being that you want to play off as many tiles as possible, instead trying to draw the S and blank.  This theory completely ignored the relative worths of other tiles: they were irrelevant in comparison to the S and blank.  It was a dark era.

That being said, in extreme circumstances, turnover does make somewhat of a difference with small tile pools that are exceptionally good or exceptionally bad.  In these cases, instead of the pool being neutral, the pool is either positive or negative, which in turn means that you need to adjust your willingness to play tiles accordingly.  While a tile like a C or N might be a positive in most scenarios, it’s not such a great tile when there are only 10 tiles in the bag and 2 S and 2 blanks remain, but those tiles can be treasure in a pool full of vowels. 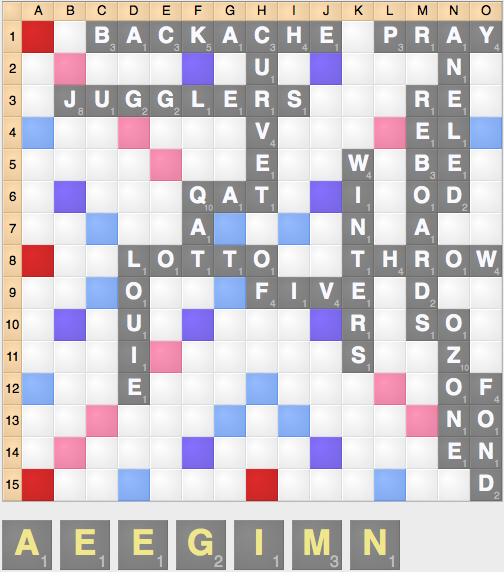 In this position, the pool is extremely strong.  Although a play like MAE 2j would normally be extremely strong and has the highest valuation, here it is a weaker play than plays with lower evaluation such as GUINEA 2g and IMAGINES 11d.  This is because while EGIN is a good leave, it is not as good as the average tiles that remain in the pool. 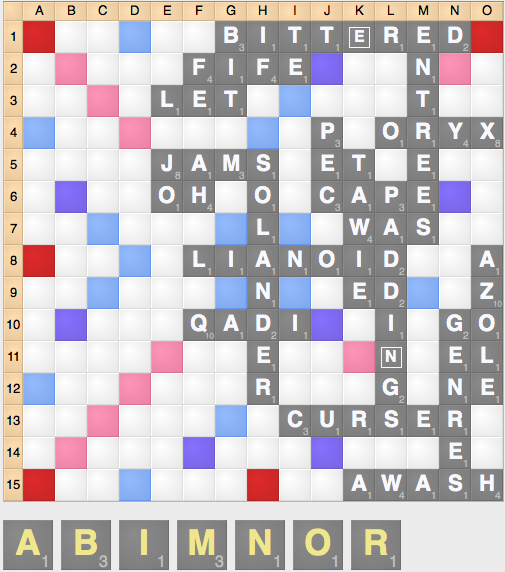 In this case, the pool is filled with awful tiles.  Although BROMINE 11b scores more points than any other play, it draws too many tiles into an awful pool.  A play that plays fewer tiles like JOB e5 (keeping AIMNOR) or MI 14j are both stronger plays since they keep decent leaves.  Not only do you avoid bad tiles, but you also force your opponent to continue drawing into a weak pool.