One of the most common questions I receive is “What’s my favorite part of Scrabble?” Now, don’t get me wrong. There’s a lot to like. The crossword element of parallel plays and disconnected finds, the anagramming, the discovery of new, foreign words, the ability to understand and control space, and the continuous, strategic adjustments necessary to win are what keep me coming back, game after game.

To be good at the preendgame, you have to understand everything that Scrabble has to offer, including even the most complex of strategic concepts. You have to not only find your plays, but your opponent’s plays. Tile adjustment is crucial. Leave implication means more than ever. Defense. Endgame timing. The list goes on.

What’s even better to me is that identifying the crucial factors is not easy in the preendgame. The preendgame requires players to identify and quantify the most salient factors in each position, and pay attention to the nuances of the game. Even small changes in the pool, the score, your opponent’s last play, etc. can alter the best play.

To illustrate this point and demonstrate the allure of the preendgame, I’ve decided to look at some small alterations to a single position, and how these small alterations can affect the best play. Doing so will not only show you how the preendgame encompasses the entire game, but also illustrate how the beautiful symmetries and complexities that make Scrabble such a wonderful game. 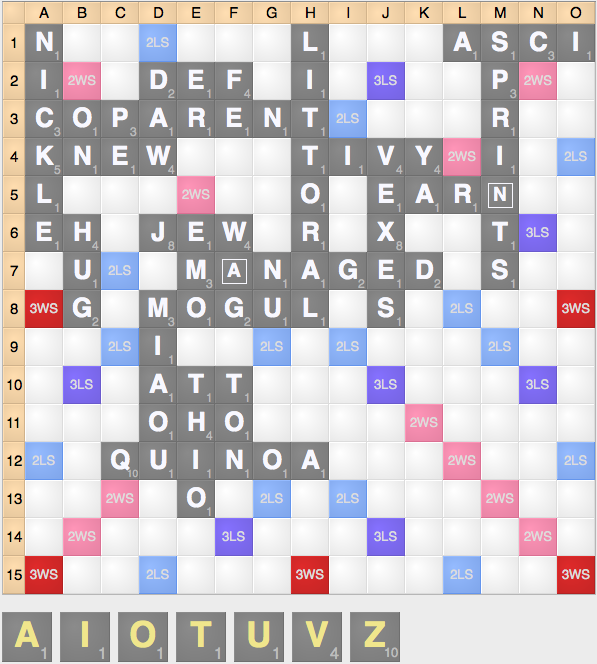 Summary: In this position, the best play is AZO a8. It scores well, preserves the Q for the U and the I, and it keeps a decent leave. AZO scores significantly more than any other play besides QUIZ, and while QUIZ keeps a better leave, it also leaves a Z at 15c, which is just far too big of a liability in this pool.
While this might seem interesting enough, this is basic as far as preendgames go. It only gets more complex from here.
Analytics: AZO (vs. QUIZ) Leave is about 5 points worse, stabilized because of scoring plays using the Q at 12c and/or using the V for h15 TWS plays.Opponent’s expected score increased by 10 points, with a decrease in entropy (sd decreases by about 3 points according to analytics over one generation, thus leading to a dramatic long-term drop) 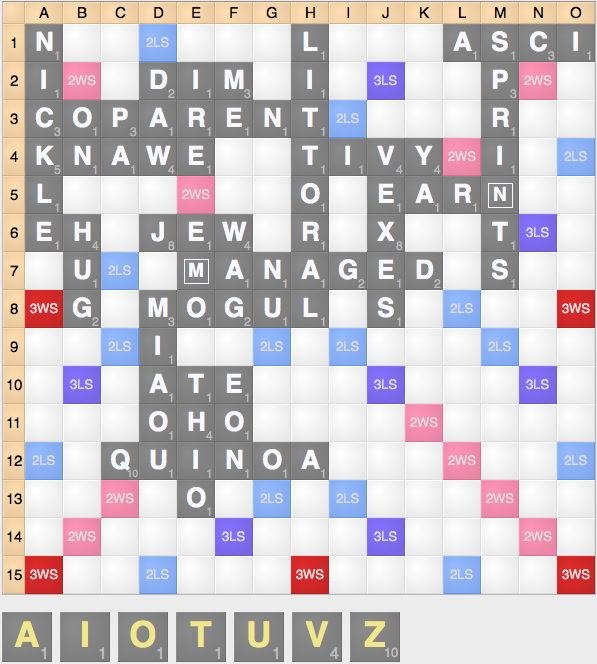 1. The pool is much worse for the open Z.

2. The pool is very good for the AOTV leave, and thus includes a lot of bingos (OVEREAT, OVERFAT, FOVEATE, LEVATOR, ABOVE, ABVOLT, etc.) If need be, you can also fish, especially for an E, as these bingos will not get blocked.

3. The number of tiles in the pool are different, such that plays at a8 give you endgame timing.

Leave is about 14 points better
Opponent’s expected score is about 5 points more after QUIZ (Z plays)
Most opponent plays will be 2 tiles, leaving 6 tiles in the pool, meaning that your play will leave 1 in the bag. 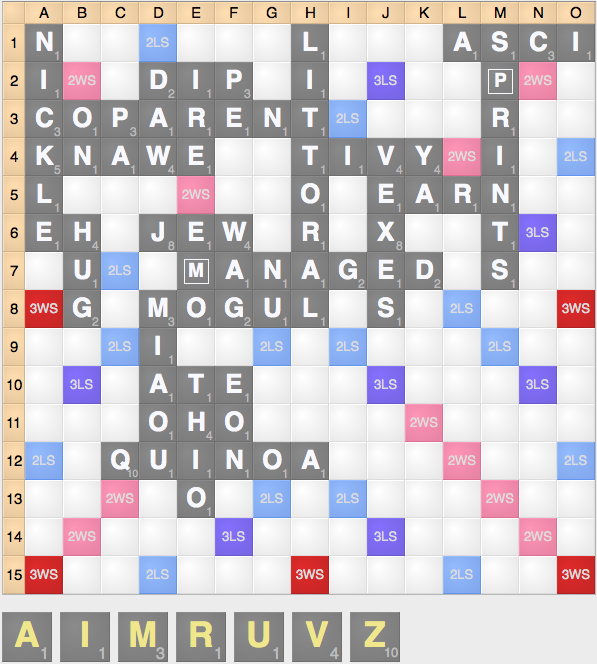 Summary: In this position, we’ve changed the rack slightly, and we now have a setup option: MI 13b, setting up the A. Unfortunately, there’s not much that goes in that spot: we can draw an F for ZARF, but that’s pretty much it: we don’t even get any V plays. An E does give us AZURE a8, but that’s something we would have had anyway. As an alternative, we have ZAMIA h11 for 48, which not only scores well but also dramatically decreases our opponent’s bingo and scoring possibilities.

Since we can hit so little, it may seem as if ZAMIA is a better play, but here, we should actually be playing the setup, even though we hit very little next turn. The reason for this is because although you don’t have anything powerful there, there is no way for your opponent to know this is the case, and because of that, your opponent is likely to block, often sacrificing points and/or their leave to do so. Your opponent thus is likely to spend their S or block with a low scoring play (such as FE/BE 14a) and will have to sacrifice points to do so. After that, several plays using the Z and/or V will often outscore your opponent, such as the aforementioned AZURE or BAZAR.

Opponent should block spot whenever they don’t have a bingo and have any reasonable block, especially since setup is recurrent.

When opponent has a bingo, most bingos do not contain F, giving you about a 20% chance of drawing ZARF, which allows you to win almost half of those games.

Opponent should be somewhat afraid of ADZ possibility after FE/BE, will always play S if applicable

Odds of drawing BAZAR or AZURE are over 70%, leaving you at about a 75% favorite or so after each scenario, even after 35 point S overlaps. (You’ll be up 20 ad in both cases have superior endgame timing, since 9 tiles in bag after MI, blocks use 2 or 3 tiles, and BAZAR/AZURE use 4 or 5 tiles) 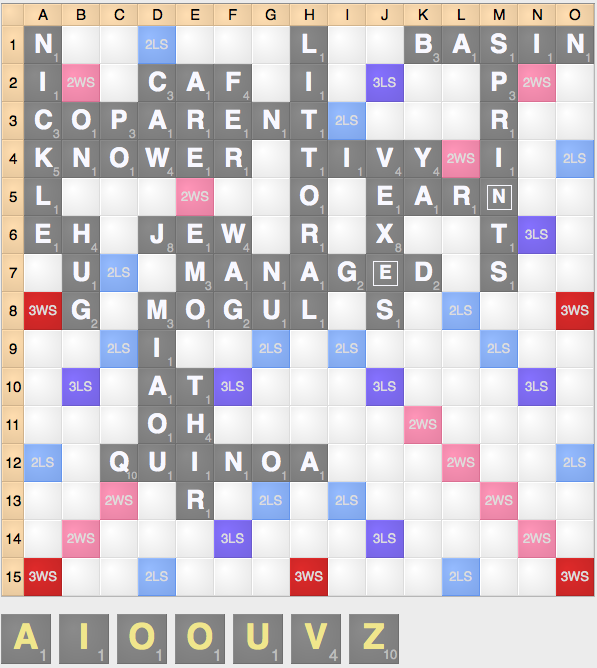 Summary: In this position, we should be playing OI 13b, but for an entirely different reason: we are trying to clear our rack, both this turn with OI and next turn with a possible E draw for ZOUAVE. In this case, QUIZ leaves us with AOOV while giving our opponent big Z plays, while AZO leaves IOUV: not exactly inspiring leaves. OI leaves us AOUVZ, which might not look very good, but it still gives us AZO next turn as well as a strong possibility for ZOUAVE, both next turn and (if need be) on future turns. The potential of the AOUVZ leave as well as the lack of potential of IOUV and AOOV make OI the best play in this position.

Analytics: E will be drawn 2/3 of the time if bag is random, so nearly 3/4 of the time after JEW, allowing ZOUAVE for 47 points, which also blocks the board. If no E is drawn, often opponent either has 3+ Es or will draw 3+ Es next turn, since 7/15 of the bag will be vowels, and as such they will either be inundated with Es or you can fish for an E reliably on a future turn.

Summary: In this position, we’re in an entirely new situation, where the key spot on the board is the open Q, and not the open A for AZO previously. In this case we’re actually waiting to use the Q, as we have free reign on that spot of the board, and should be actually playing AVO to save our Z for QUIZ. In addition, AVO has another important benefit: it draws out the Y, making it very difficult for our opponent to use the Z next turn, given this pool. If the opponent has the Y, they are likely to use it next turn, giving us the ability to play QUIZ with near impunity, almost certainly winning the game.

It’s worth noting that there’s even more you can do with this position. You can make changes such that TUI is the best play: or QUIT. You can change the rack such that fishing or setups are involved, or even make a blocking play next turn and preserve your scoring options for later. There’s so many possibilities during the preendgame. This is why it’s my favorite part of Scrabble.