1. Race to the strong tiles. Unlike Classic Words with Friends or Scrabble, there are a few tiles (the Z, X, S and blank) that are significantly stronger than any other tile in Words with Friends, while most of the other tiles have a nearly equal value. Drawing these tiles is extremely important.

2. The hotspots are everything. Take them whenever possible, and don’t leave them open for your opponent. TW combinations in this game can be totally devastating for both players, making even the simplest of plays. Even 3 letter plays like COW can easily score over 50 points.

3. Pay attention early on to rows 1, 3 and 9, and 11, and columns A, C, I, and K. These lines are extremely lucrative for scoring. Do not leave these hotspots open for your opponent, and try to lure your opponent into opening these spots for you.

4. If you have to leave TW squares open, be sure to either make it difficult for your opponent to use these openings and/or try to leave tiles open such that it is difficult for your opponent to play high scoring tiles on the DL/TL squares. Sometimes you may have to sacrifice a significant number of points to avoid leaving these scoring spots open.

5. Pay attention to vowel-consonant ratio and avoid keeping too many clunky, high point tiles. This will allow you to score big when your opponent leaves you an opening.

6. Track tiles. Tracking is even more important in fast play since it allows you to make setups, allowing you access to lucrative hotspots while depriving access to your opponent.

7. If you must open (since you are behind), try to open two separate hotspots at once. Opening a single hotspot is just going to allow your opponent to block, which they will do nearly all of the time. Opening two hotspots at once ensures that you get at least one of those spots to yourself, which you can used to challenge your opponent’s lead. 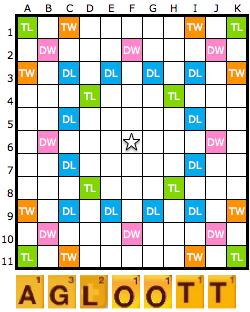 In this position, although you could play and even hit the DW square, you should instead exchange all of your tiles. The openings that you would have to give your opponent are extremely powerful, and dwarf the points that you would score this turn.If you were going to play, you would play GALOOT at 6a, opening both the G to TW/TL or TW/TW possibilities and the L to DL/DL/TW possibilities. But since the score is even, your opponent has a huge advantage with these possibilities, since they get first dibs and can easily score well over 50 points with the right tiles. You could also play TOG/TOGA for cheap points, but it simply isn’t worth it: you want to try one of the strong tiles such as ?/S/X/Z. 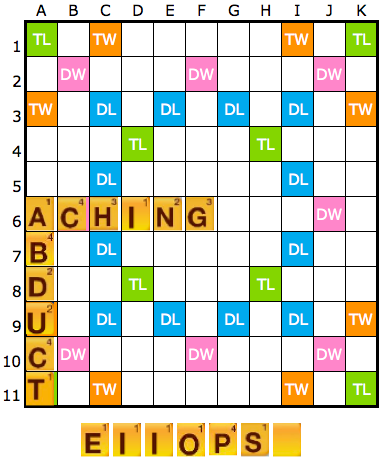 Here, while it’s tempting to play POlICIES b2 (72), doing so would be insanely risky, as it opens up the TW, TL, and DL squares in the top left corner which your opponent can use to score extremely well. Instead of POlICIES, you are better off playing COPIES 10a (48), which makes high scoring plays still possible for you but much more difficult for your opponent since it will require a 6 or 7 letter word to reach the bottom right 3×3 square of hotspots.

In this position, while ANTERIOR b1 scores 62 points, you are better off playing RATION k1, scoring 59 points. This is a MUCH stronger play, since it prohibits your opponent from using the k column to score a huge number of points: easily making up the 3 point sacrifice. Even if ANTERIOR scores 15 more points than RATION, RATION would still be a stronger play. 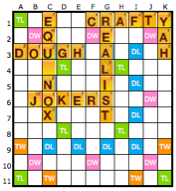 In this position, you are far behind and need to catch up.  Unfortunately, there are no great scoring options, either this turn or on the horizon.  Thus, your best option is to create several openings.  Playing RELIVE creates several openings which cannot be blocked simultaneously, guaranteeing you a good scoring option next turn, as seen below: 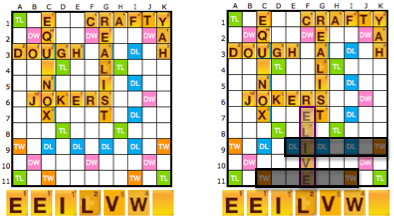 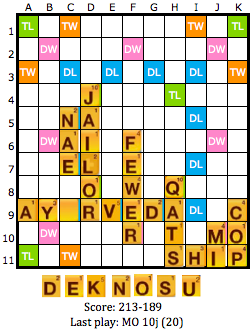 In this case, the best play is a setup, playing SO 10a and setting up ASK at 11a for a big score after playing KUE.  This play wins nearly automatically if your opponent doesn’t block (and they often can’t) especially since they are unlikely to be holding the B after MO: the only tile that fits at 11b.  Even if they do block, most blocking plays don’t score very well, allowing you to hold on to your lead. 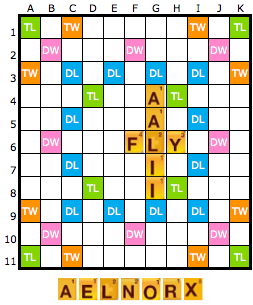 In this position, you have the X that plays at h4.  While it’s tempting to play OX at h3 for 50 quickly and keep the bingo-prone AELNR, this will give your opponent a high scoring comeback along column I or row 2/3, giving you little in return.  In contrast, a play like EX or puts an E at h3, making column I and row 2/3 plays more difficult.  REX is even better, doing even more to restrict column I and row 2, and only giving PREX in row 1 on the off chance they have the only remaining P.