This is the first installment of the “Controlling Chaos” series on entropy.  For a list of all articles in this series, please click here.

When making an investment or decision, there are two things that are important: worth and risk.  In general, worth is expressed as expected value while risk expresses the range of possible.  Balancing these factors is essential when trying to make monetary, professional, personal, and game decisions.

These concepts can be applied to Scrabble.  A play’s worth can be approximated as the sum of points and leave, although there are certainly a multitude of other factors. Risk also plays a prominent role.  For example, a play that opens a triple-triple alley is very risky since it could result in a huge score, but it typically has little effect on worth since triple-triples are fairly unlikely.  In Scrabble, risk is assessed in terms of entropy.

Entropy measures the ability for a trailing player to overtake their opponent in score. In statistical terms, entropy can be equated to the variance of score difference between you and your opponent, or the likelihood of large scoring swings to occur. When behind, entropy is desirable as it increases the likelihood of catching up (as well as your chances of getting blown out). When ahead, entropy is undesirable since it allows your opponent to win if he is fortunate enough to draw well. (When the score is tied, entropy is neither desirable nor undesirable.)

Entropy should be considered alongside equity.  When comparing two plays, many players find it helpful to think of entropy and equity as an ordered pair, where both factors are taken into account.  Sacrificing equity in order to attain a more desirable entropy level is an important part of Scrabble strategy.

Entropy is usually divided into two categories: rack entropy and board entropy.  As the name implies, rack entropy assesses the fluctuations of your future score with a specific rack.  High entropy racks include racks with heavy bingo potential as well as imbalanced leaves such as AEI.  Rack entropy situations show up fairly frequently, but since tiles are played very quickly, rack entropy only matters for one or two turns.

Board entropy assesses the ability for the score to change on a specific board.  High entropy boards have few scoring spots but many bingo lines.  Board entropy can vary greatly both in the long and short term: bingo lines can be thought of as “currency” for short term entropy while space and board dynamics are the “currency” for long term entropy.

When making decisions about entropy, there are a number of factors that you must take into consideration, including:

The concept of entropy is prevalent in many other games.  Sports have “prevent” defenses, many games advocate trading pieces or health when ahead, and trailing players in nearly any game or sport become aggressive, sometimes to the point of recklessness.  However, the idea is not so prevalent in Scrabble.  Scrabble has only been around for about 65 years, and for much of the time, it was perceived as a word game instead of a strategy game. Game strategy has only played a major role in Scrabble over the last decade, and as a result, concepts such as entropy are fairly new. Since entropy is such a new concept, many people have errant beliefs about entropy, including:

Like any variable, entropy can be calculated. While the math of entropy is very complex, its effect can be brought to light by using Quackle to formulate a data set and representing that data set graphically.

First, let’s begin by looking at a basic Scrabble distribution, assuming a random rack at a random time of the game. 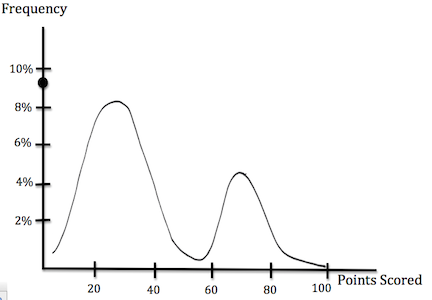 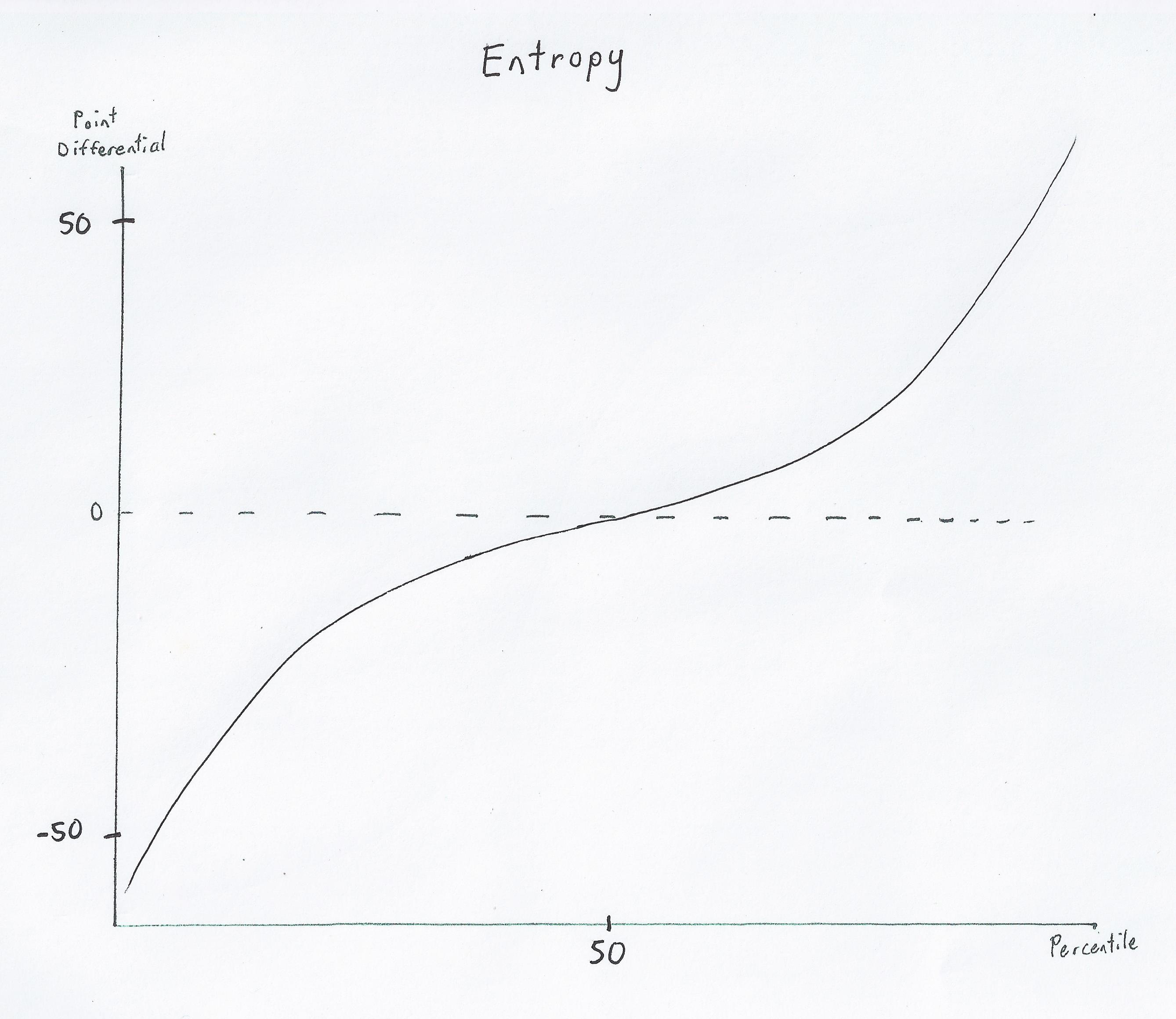 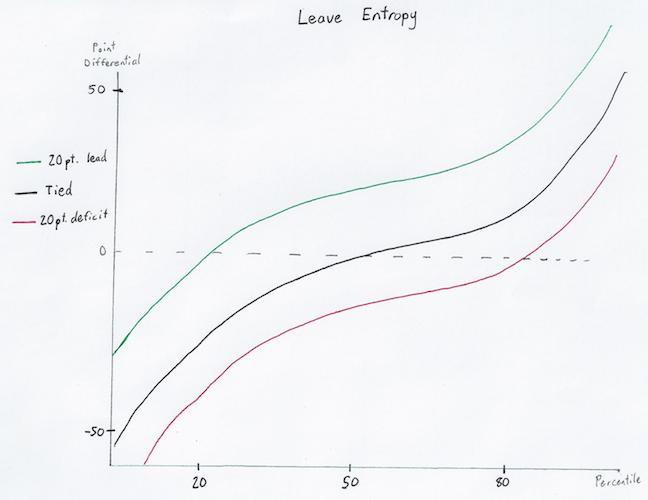 Here is the same graph showing entropy and its effect given the game score.  As you can see, without a bingo it is fairly difficult to make up large deficits, because of the flat portion towards the middle of the entropy graphs.

On the left is the distribution of a scoring leave or a low entropy board.  On the right, you can see the entropy.  Scoring leaves or low entropy are thus great for maintaining a lead, but not so great for overtaking a deficit.

On the left is the distribution and entropy of a bingo leave or open board.  As you can see, there is a huge void of scores between 35-60 points, creating a huge entropy.

Unsurprisingly, fishing is very similar to a strong leave, as you can see with the fishing distribution and entropy graphs.

The setup graph might seem a bit strange, but this is because of the unique nature of setups when they are unlikely to be blocked: they are often nearly guaranteed.  Because of that, the entropy is extremely low when the setup cannot be blocked, and depends on whether or not the setup is easily detected.

Obviously, the additive effect of entropy over time does lessen its effect. For example, if you have a strong bingo leave (such as EIRST) on a somewhat open board, eventually you are going to convert that rack into a bingo.  While there are ways to affect long term entropy, these changes provide a skew and not a drastic change in polarization.

This is an example of an entropic open board. Here, there are plenty of bingo lines available but the opportunities are much more for bingos than scoring, as it is difficult to score with high point tiles on this board.

This is an example of a typical closed board. There are a few scoring options available but not much in terms of bingo options, and swings in this game will be fairly minimal.

This is an example of a volatile closed board. While there are few scoring options there are potential bingo options, many of which will be difficult to block without substantial sacrifices in equity.