A common motto within expert level Scrabble play is: “When you’ve found a good play, look for a better one.” And while that it’s certainly a good idea to never be satisfied, the practicalities of time and effort make this unrealistic, since you could often be spending an eternity looking for a non-existent play with a multitude of racks. At some point, it’s an important part of time management not just to look for better plays, but also to know when to stop looking.  Knowing when and how to stop looking is an essential part of clock management.

Is a Better Play Possible?

One of the best ways to improve your clock management skills is by asking yourself: “Is there anywhere on this board where a better play could possibly fit?”  In some positions, even if numerous good plays are possible, you can use logic to quickly conclude that it’s unlikely that a better play exists than your first option, simply because it’s impossible to score more points given your rack and the board. 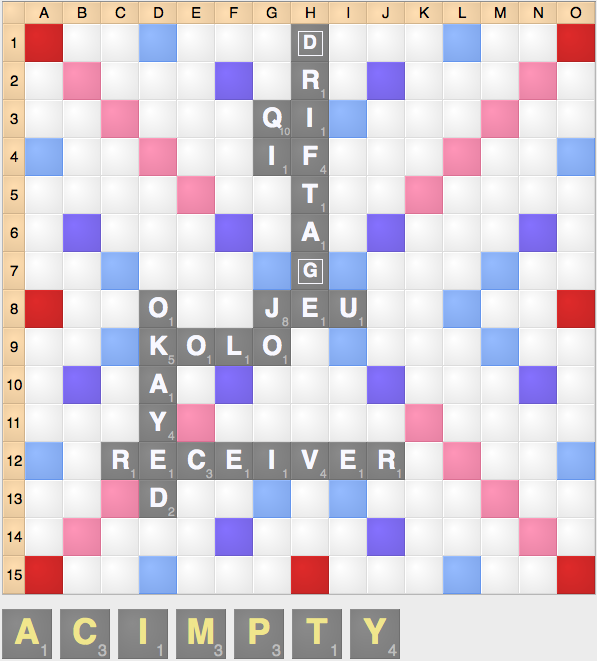 Here is an example of a position where most players look at the V at h12, and if you look for a minute, you can often find the word CAVITY.  Let’s say that you’ve found CAVITY.  At this point, you should ask yourself: “Okay, where on this board could a better play possibly exist?”  While there are plenty of places on this board to play for 30+ points, there’s no way that open spots like row 4, row 10, or column 3 would ever be a stronger play than CAVITY: thus, there’s no reason to continue looking for other plays. 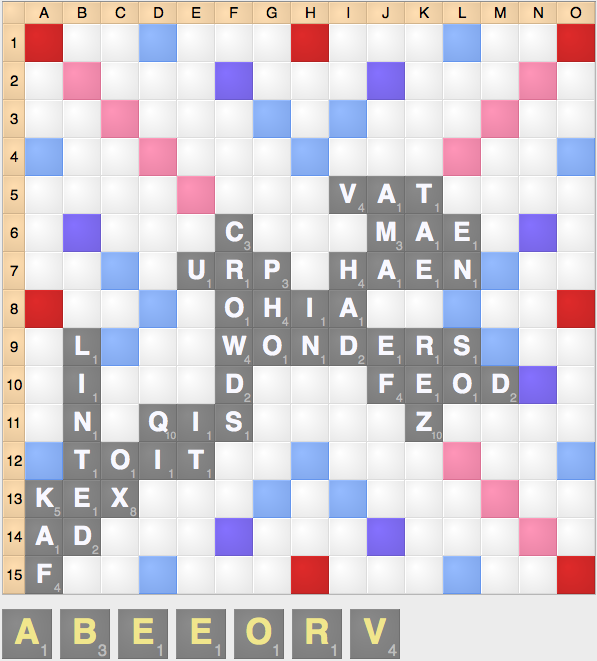 In this diagram, it should be apparent that there’s only one good spot to play. Once you’ve found the word ABOVE at a5 and determined that nothing else fits in column a, you don’t need to continue looking for anything else since there aren’t any potentially lucrative scoring spots or bingos that are possible. 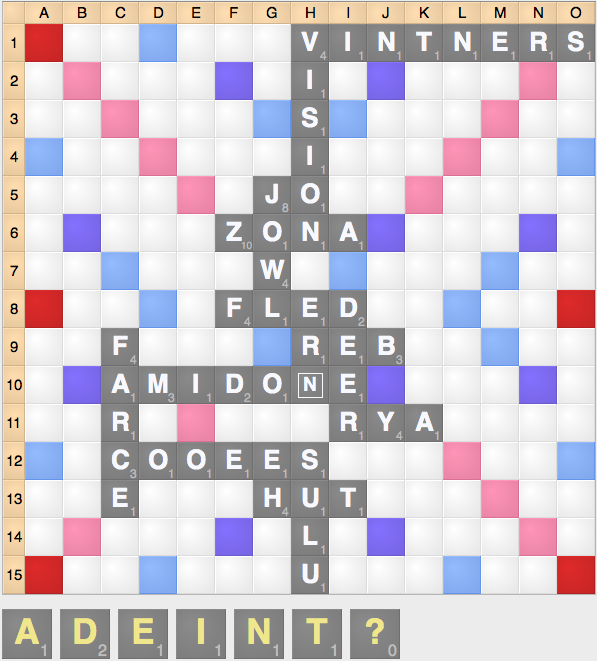 In this diagram, although there are a ton of bingo options, it’s pretty close to impossible for a bingo to be superior to the easy-to-find SANDIEsT o1. Thus, there’s no reason to keep looking.

One of the biggest reasons that people fall into time trouble is a simple disorganization of thought.  Many players repeat the same thoughts several times a thought, or have conflicting thoughts that they haven’t yet settled in their own mind (for example, “I need the S to win” vs. “If my opponent has the S, I’m dead”)

One good way to sort out one’s thoughts is to develop a mental checklist of sorts.  For example:

If it’s obviously close between similar plays, pick something

Many times players spend a lot of time deciding between several similar plays that have few positional differences, but have some technical differences such as comparing leaves, comparing points and leave, or comparing points with a specific open scoring spot. In these cases, while it’s obvious that the candidate plays are nearly equivalent, it’s not obvious which is better. Still, it’s often better to make these decisions quickly, since even if you are wrong, the difference in plays will be relatively minute. 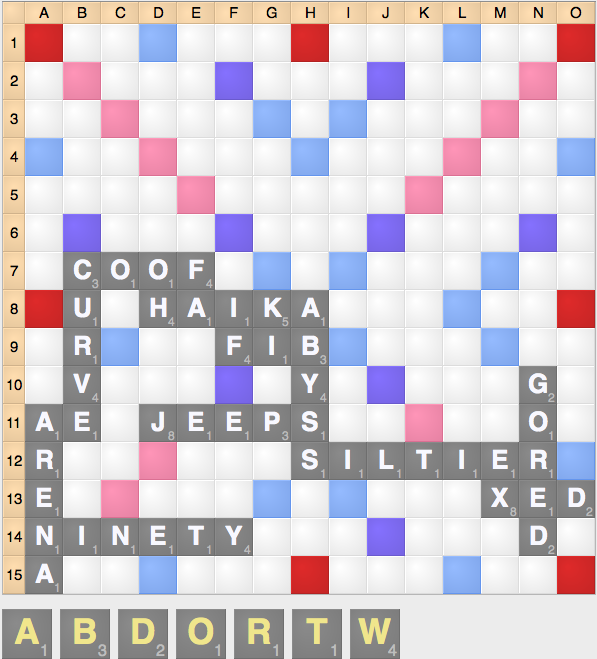 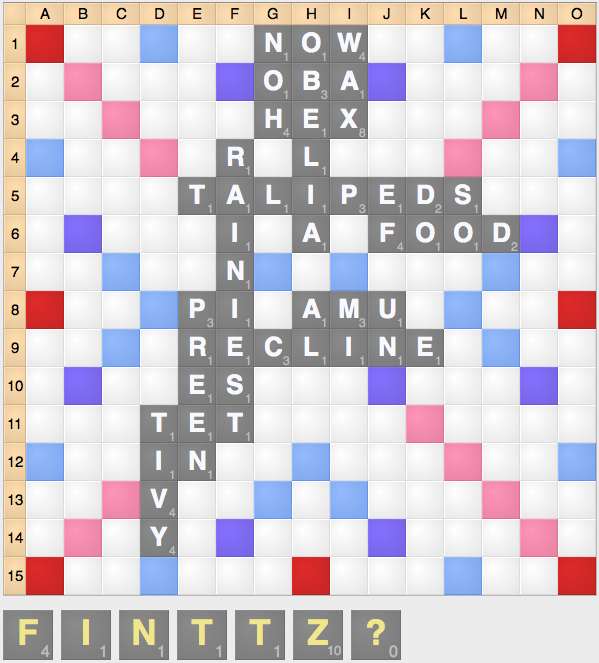 In this case, after doing some examining, you have three options: FrITZ l8 (49), DITZ m6 (25) and EFT k9 (12).  Although these options appear quite different, they’re all just different plays on a spectrum of sacrificing points and leave, with FrITZ also opening up a few more scoring options.  In this case, again you’re faced with a bunch of fairly similar plays, and it’s not worth taking a lot of time to make a decision.

Shortcuts when you are low on time

Many players who often fall into time trouble often make several common mistakes, trying to play too quickly in situations where they actually need to take some time to find the best play.  Here are a couple of examples: 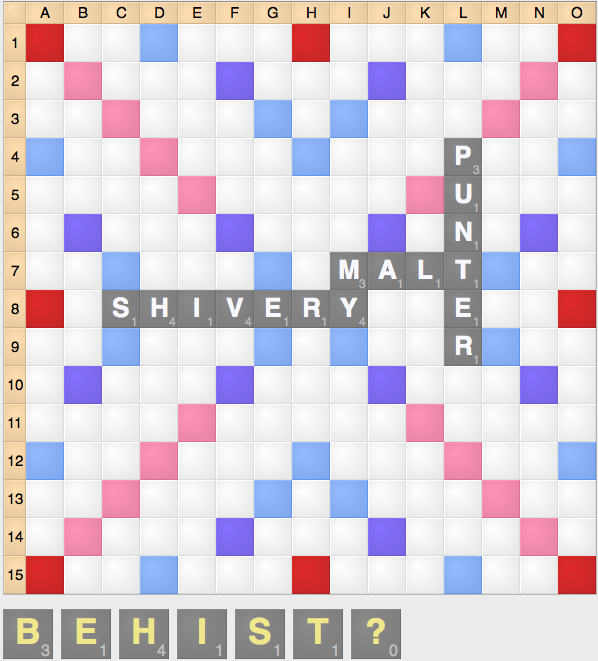 In this position, the first bingo that most people see is usually either BuSHIEST or BITcHES. Looking at this board, it should become clear fairly quickly that there are only two likely better bingo lines on this board: column h and column e.

With column E, the intuitive thing to do is to first look for RE- bingos, and thus, we can quickly find a bingo, REBIrTHS. Since this bingo is undesirable (it puts the blank on the DLS and slots the S on row 15), it makes sense to keep looking, but after looking for a minute, you’ll find there’s nothing that fits in that location.

At this point, you should also look at column e. There is indeed a bingo that forms a DWS-DWS play using the I, but it’s difficult to spot. Can you spot it? (<<SOLUTION>>) 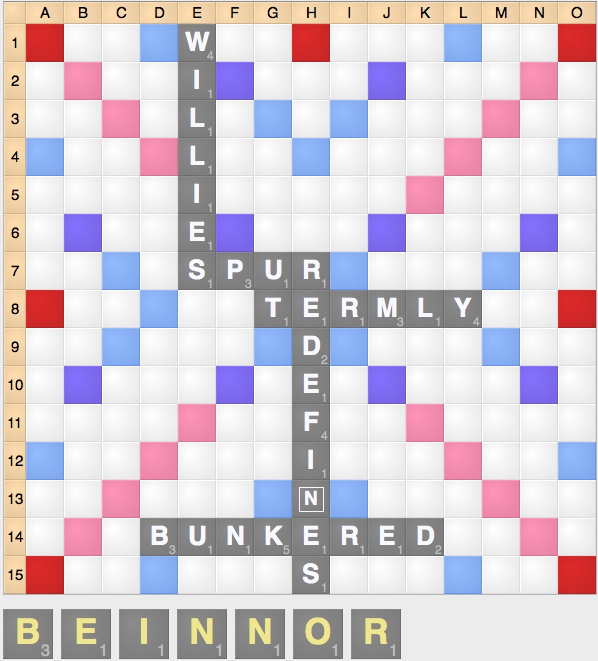 In this position, the most obvious spot is at 15a, using the TWS. While the first word that most people see is BONE, looking slightly further most players are able to see the higher scoring play ROBIN. This becomes the initial fallback option.

15j/15k look initially promising, but there are no good words that can be used at that spot, since the B must be used if you want to score well, preferably at 15l, and no words fit in that configuration. Similarly, while the L at k8 looks ripe for a 2×2, a brief look concludes that there are no 2×2 permutations available.

However, there are good possibilities using the open W at 1e. While the first possibility that most see is WINNER, that is not as good as ROBIN. However, by looking for longer words, one might find a longer play that scores more points, such as NEWBORN or BROWNIE, scoring 39 points.

Some positions are admittedly extremely difficult because of the overwhelming number of possibilities, especially when you have a blank in your rack. In these cases, it is completely understandable to spend a few minutes looking for all the possibilities, particularly when there are several potential spots that you can’t quite use.